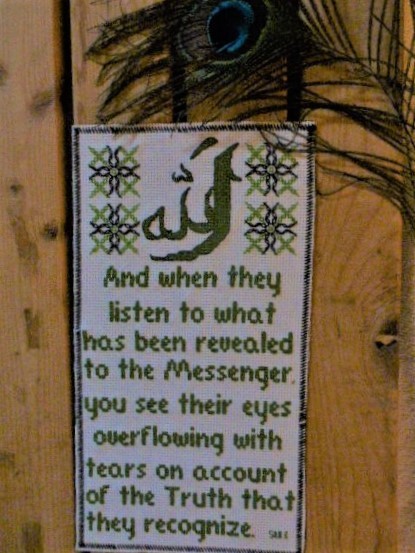 In Surah al-Maidah (5:83), Allah, Al-Nasir (The Helper, The Supporter, The Defender), informs us, in the previous ayat (verse), that surely those who are nearest in affection and love to those who believe are the people who say “We are Nasara” (Christians, from nasr (help)). The reason for this, Allah Subhanahu wa ta’ala says, is because among them are qassisina (priests, chaplains, pastors, clergy) and ru’bana (people dedicated to worship, those who live a monastic life, monks and nuns) and that they are not yastakbiruna (arrogant, proud). The root of qassisina is those who search for something, especially in the dark, those who are inquisitive, those who search for ‘ilm (knowledge). The root of ru’bana is rahb meaning fear and terrified and means those who abandon the dunya (this worldly life) and engage only in the worship of Allah Subhanahu wa ta’ala due to extreme fear of Allah’s Wrath (see 2:40, 7:154). The root of yastakbiruna is the same as Akbar meaning Greatest, as in Allahu Akbar (Allah is Greatest). In this ayat, Allah Subhanahu wa ta’ala continues by saying that when they listen to and hear what has been revealed to the Messenger of Allah (s.a.w.), we see their eyes overflowing with al-dam'i (the tears) because they recognize the Truth. Al-Hamdulillah (All Praise Belongs to Allah)! These ayats were revealed after Prophet Muhammad (s.a.w.) sent a group of Muslims, under the management of Jaffar al-Tayyar ibn Abu Talib, to King Najashi in Abbysinia (Ethiopia) to take refuge from the persecution of the Quraysh in Makkah. Upon hearing the ayats from Surah Maryam recited by Jaffar al-Tayyar, the Christians’ hearts were touched with the Truth and they cried. Later, when Jaffar al-Tayyar and others returned to Madinah, along with a delegation of Muslims sent by king Najashi to Prophet Muhammad (s.a.w.), they also cried when they heard Surah Yasin. When they hear the Truth from Allah Subhanahu wa ta’ala, shedding al-dam'i of joy at being closer to the Truth of The Beloved, they say, “Our Lord! We believe so write us down with al-shahideen (the witnesses).” Those who follow the teachings of Prophet Isa (a.s.) (Prophet Jesus (a.s.)) naturally would be merciful, kind, loving, humble, knowledgeable, truthful and just, as any true follower of a Messenger of Allah should be, and they recognize the Truth when they hear it because it is the same Truth of One Allah and the glad tidings of the advent of Prophet Muhammad (s.a.w.) that Prophet Isa (a.s.) gave them. The people who embrace Islam and Prophet Muhammad’s (s.a.w.) teachings and way of life are those who say “We believe in it. Verily, it is the Truth from our Lord. Indeed, even before it, we were Muslims.” (28:52-53). This is important to realize: People who followed or follow the true teachings of the former Prophets of Allah and believe in Allah our Creator, not deviating, were or are “Muslims” because Muslim means people who submit to Allah Subhanahu wa’tala and if they hear the Words of Allah The Most High in the Holy Qur’an they will embrace it, the Messenger of Allah, Prophet Muhammad (s.a.w.) and Islam. This is why when giving dawa (calling to Allah), the Words of the Holy Qur’an should be recited to the people. [This bookmark was time-consuming, thus the higher price.]