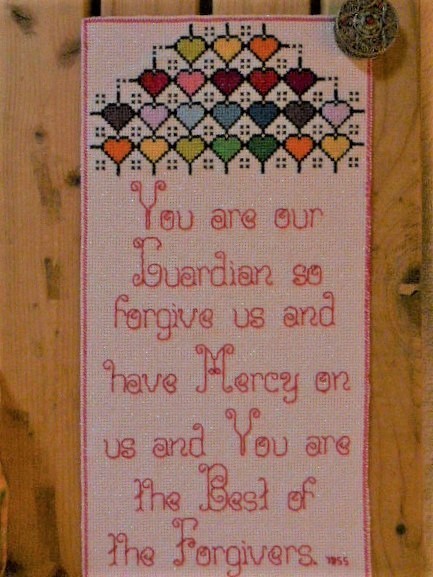 In Surah al-A’raf (7:155), Allah, Al-Ghafir (The One Who Protects us from sinning, The Perfectly Forgiving, The One Who Veils our faults, The Pardoner), in the story of Prophet Musa (a.s.) (Prophet Moses (a.s.), tells us, in the previous ayat (verse), that after receiving the Shari’ah (laws) from Allah Subhanahu wa ta’ala on Mount Tur and coming down to find the people engaging in idol worshipping with a golden calf, he took up the al-alwaha (tablets), the inscription of which is Guidance and Mercy for those who are yarhabuna (fearful) of their Lord. In this ayat, Prophet Musa (a.s.) chose 70 men for Allah’s Appointment to repent to their Lord for what they had done, but they asked to see Allah The Most High, so an earthquake came by the Will of Allah Subhanahu wa ta’ala and killed everyone. Prophet Musa (a.s.) asked his Sustainer if everyone would be destroyed because of what the fools had done. Prophet Musa (a.s.) said that Allah The Most High let some go astray and guided some. Then he supplicated his Sustainer, saying: “You are our Guardian so forgive us and have Mercy on us and You are Al-Ghafir (The Best of Forgivers).” It is said that Allah restored the dead to life and they gave witness about what had occurred. [The sheer size of this bookmark results in the higher price.]