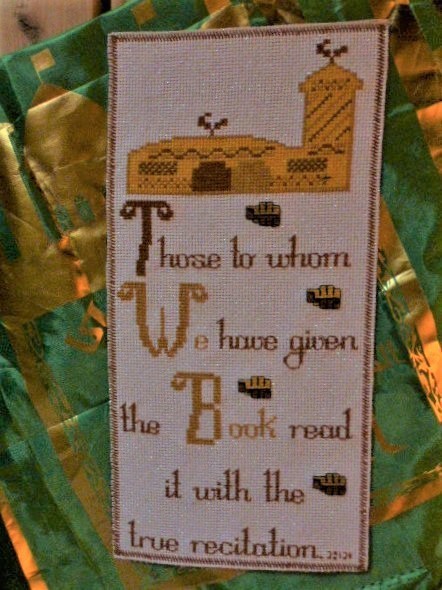 In Surah al-Baqarah (2:121), Allah, Al-Ahad (The One and Only, The Unity), reveals to us, in the previous ayat (verse), that the Christians and the Jews will never be pleased with Prophet Muhammad (s.a.w.) until he follows their religion and if he did follow their desires he would find no Guardian or Helper. He must tell the people, “The Guidance of Allah is the Guidance.” The Absolute Guidance can only come from The One Who Possesses Absolute Knowledge. This ayat was revealed after Prophet Muhammad (s.a.w.) was ordered to change the direction of salat from Al-Quds (Jerusalem) to the Holy Kaaba in Makkah. The Ahl al-Kitab (People of the Book) did not like that and even some Muslims thought it was wrong to do things that upset them. Allah Subhanahu wa ta’ala says that those who have been given the Kitab (Book) yatlunahu Haqqa tilawatihi (recite it with the true recitation). This ayat may have been revealed after Jaffar al-Tayyar ibn Abu Talib returned from Abyssinia (Ethiopia) with a delegation of 32 Muslim converts sent by king Najashi to learn about Islam from Prophet Muhammad (s.a.w.) in Medina and a group of eight Syrian monks who when they heard Surah Yasin they cried. Others say it was revealed when various Jewish people accepted Islam. The true recitation means reciting the Holy Qur’an as it is supposed to be recited. This does not only mean with the right pronunciation, articulation and intonation because without the meaning and content of the Words of Allah our Sustainer little will be gained to improve one’s self. It also does not mean memorizing the Holy Qur’an without its meaning and understanding. True recitation means much more than that. It means contemplating and meditating on, studying and understanding the Words from our Lord with their meanings and exquisiteness and complying with them by not changing the words, not translating the words wrongly, not interpreting it wrongly, allowing what is halal (lawful) and forbidding what is haram (unlawful), learning lessons, obeying commandments, seeking Allah’s Mercy, hoping for His promises and taking refuge in Allah Subhanahu wa ta’ala from His warnings. (see 38:29) Essentially, the true reciters are those who make the Holy Qur’an their guide for their whole lives. And whenever they recite the Holy Qur’an, they are refreshed and their souls are pleased and they can make decisions with the right intentions and with a strong and prepared feeling of action, inshallah (Allah Willing). There are those from the Ahl ul-Kitab who follow their Books truthfully and, inshallah, they did and will believe in Prophet Muhammad (s.a.w.) also and accept the Truth of the Holy Qur’an because his advent is written in their Books. (see 7:157, 17:107-108, 28:52-54) These ayats are also Allah’s Subhanahu wa ta’ala advice for us. We must not seek to follow their desires or seek to please or appease the Ahl ul-Kitab. Many of them only want to turn us from Islam. Instead, we must continue to give dawa (call to Allah The Most High) and tell them that is the True Guidance and recite the Holy Qur’an to them, inshallah. Islam is the Straight, True and Comprehensive Deen (way of life, religion). Al-Hamdulillah (All Praise Belongs to Allah)! [The sheer size of this bookmark results in the higher price.]