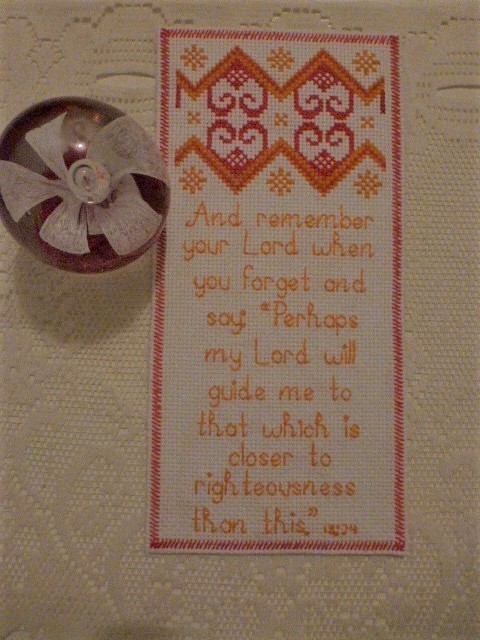 In Surah al-Kahf (18:24), Allah, Al-Rashid (The Director to the Right Way, The Appointer of the Right Path and Belief) is describing the Companions of the Cave and advises us that when we forget something or don’t know something, we should remember our Lord and turn to Him and ask for guidance and say that perhaps Allah Subhanahu wa ta’ala will guide us to a nearer way that is righteous and correct. The ayat (verse) and the story of the Companions of the Cave were revealed after a group of Jewish scholars was asked by several polytheistic chiefs of Makkah to determine whether Prophet Muhammad (s.a.w.) was a Divine Prophet and if they had anything in their Books about his advent. The scholars said they should ask Prophet Muhammad (s.a.w.) three questions – about the Companions of the Cave, Dhul-Qarnain and Al-Ruh – and that if he answered two of them, it would prove he was the Messenger of Allah. The Prophet told them he would explain it “tomorrow.” And so Allah Subhanahu wa ta’ala delayed the revelation, most likely for about 15 days, and the people began to doubt that Prophet Muhammad (s.a.w.) was actually the Messenger of Allah and said awful things about him. When Surah al-Kahf was revealed, Allah Subhanahu wa ta’ala said that when we say, or even write, “tomorrow,” we must add inshallah (Allah Willing) because everything is in Allah’s Subhanahu wa ta’ala Power and He Causes all things, including “tomorrow.” It is human to forget and we must ask Allah Subanahu wa ta’ala for guidance, whether it is something we forget to say, such as inshallah, or something we do not know. It is not right to talk about things we do not know the truth about. In any case, if we say “tomorrow” we will do something, without saying inshallah, and “tomorrow” comes and we don’t do what we said we would, it means we have uttered a falsehood. We must depend on Allah Subhanahu wa ta’ala for all things because we cannot perform anything without Allah’s Subhanahu wa ta’ala Will and this is the way of the Prophets as mentioned in the Holy Qur’an, for example Prophet Yaqub (a.s.) (Prophet Jacob (a.s.)) in 12:99, Prophet Musa (a.s.) (Prophet Moses (a.s.)) in 18:64, Prophet Shu’aib (a.s.) (Prophet Jethro (a.s.)) in 28:27 and Prophet Ismail (a.s.) (Prophet Ishmael (a.s.)) in 37:102. This ayat about guiding us to a nearer way that is righteous and correct means that not only Allah Subhanahu wa ta’ala may guide us to remember to say inshallah, even if we are “certain” it will happen, such as death, and other righteous things, but that we may be guided to knowledge and awareness that is more convincing, clearer and expressive than what we know or don’t know and closer to the truth of the matter, inshallah.