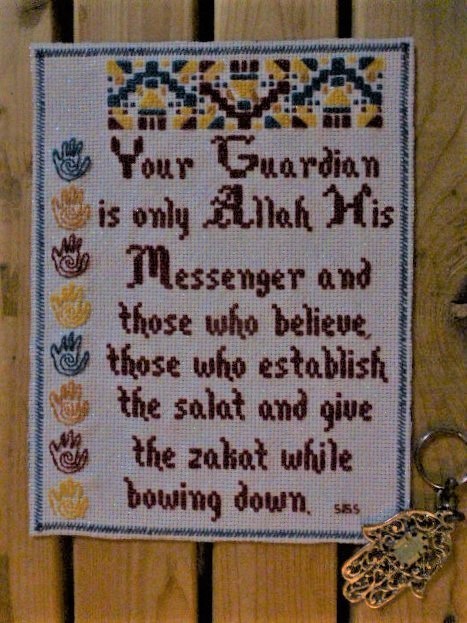 In Surah al-Maidah (5:55), Allah, Al-Waliy (The Nearby Guardian, The Master, The Loving Defender, The One Who Guides to Righteousness, The Protecting Friend), states clearly that our only Guardian, Master and Defender are Himself, Prophet Muhammad (s.a.w.) and those who believe, those who establish the salat (prayer) and give the zakat (alms-giving) while they ir’ka’u (bow down). This ayat (verse) was revealed after a poor man came into Al-Masjid al-Nabi (The Masjid of the Prophet) asking for assistance and Prophet Muhammad (s.a.w.) asked who could help him. Imam Ali (a.s.) was praying and while in ruku (bowing), he extended his finger so the man was able to remove his ring. Immediately, Prophet Muhammad (s.a.w.) announced, “The one upon whom I am the Waliy, then Ali is their Waliy.” Many people saw this event and reported it and this hadith (narration) is narrated by both Sunnis and Shias. This word waliy does not mean friend or helper because all Muslims are friends and helpers of each other. Because the word Allah uses, waliyyukumu, is singular it means only these three, Allah, the Prophet and Imam Ali (a.s.), are meant. And because there is no wa (and) between “those who believe” and “those who establish salat…”, it means that “those who believe” means only the one who gives zakat while bowing in salat, which everyone agrees is only Imam Ali (a.s.). It denotes the guardianship of Allah Subhanhu wa ta’ala, Prophet Muhammad (s.a.w.) and Imam Ali (a.s.). Imam Ali (a.s.) did not view his salat as a barrier to helping the needy and we must not follow leaders who are inattentive and unresponsive to the needy. Allah Subhanhu wa ta’ala, in the next ayat, tells us that those who take as their Waliyy Allah, the Messenger and “those who believe” (Imam Ali (a.s.), then indeed the Hizbullah (Party of Allah) are victorious, triumphant. Al-Hamdulillah (All Praise Belongs to Allah)! [This bookmark was time-consuming, thus the higher price.]