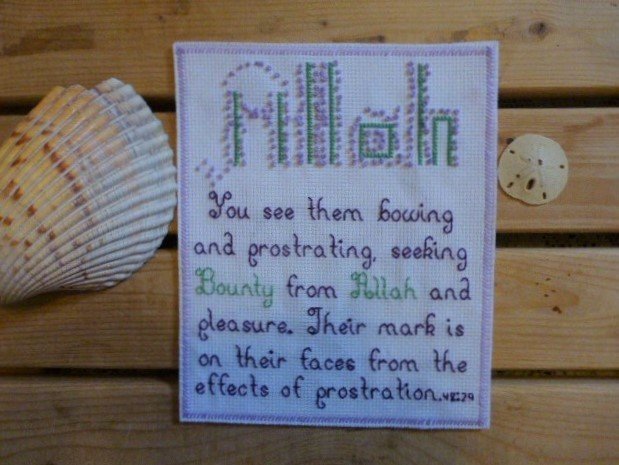 In Surah Al-Fath (48:29), Allah, Al-Raheem (The Merciful), continues to present a depiction of Prophet Muhammad’s, peace and blessings be upon him and his family, companions and followers, including their outward and inward characteristics and also their thoughts, emotions and deeds by enumerating five attributes, three of which are presented here – ruku (bowing) and sajdah (prostration) in salat (prayer), seeking the bounty and pleasure of Allah and the sima (mark) on their faces from prostration. Worshipping Allah, Glory to Him, by performing salat reflects submission to the Divine Command and the negation of arrogance and false pride. It takes a true believer in Allah to bow and prostrate to their Lord five times every day of their life. Believers are not pretentious nor do they expect people to reward them. They are solely attentive toward Divine Satisfaction and Allah’s Bounty and often confess their faults and view their deeds as unworthy of Divine Rewards. Finally, the mark of prostration is seen on their faces due to the repetitiveness of placing the forehead on the Earth in submission to Allah’s Majesty. As well, the believers’ appearance is one of humbleness, light, peace, piety, rightness, lawfulness and justness, not only in their faces but also in their whole demeanour and life choices and practices. These exalted characteristics are a source of encouragement for friends, but enrage the disbelievers. (The other two characteristics are discussed in the previous tapestry – Prophet Muhammad, peace and blessings be upon him and his family.)